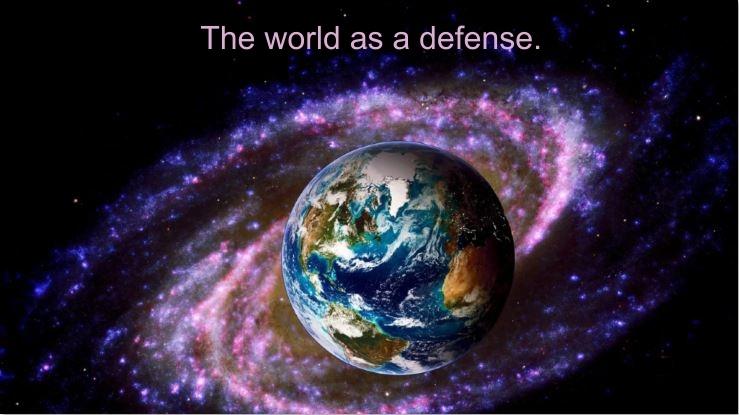 The section "What Is the Body" in Part II of the workbook closes with these inspiring words, which contrast the ego's fearful lies regarding the body with love's truth, found in the right mind:

Yet the ego teaches the opposite: we can be safe only in the world, but not without erecting effective bodily or material defenses—individually and collectively. All these, regardless of their form, are variations of its central defense known as the special relationship, which focuses exclusively on the body, the ego's projected home of separation. Thus Jesus asks the rhetorical question: "If you perceived the special relationship as a triumph over God, would you want it?" (T-16.V.10:1). The question is rhetorical because Jesus knows the answer, as do we: "Absolutely!" Why else would we choose specialness unless it preserved the triumph that gave us what we define as "life," to replace life as God created it? And so we walk the earth, arming ourselves with the identity of scarcity and deprivation—the clothing of specialness—believing in our insanity that identifying with this special self protects us from God's wrathful vengeance over what we thought we did to Him. "Think not He has forgotten" (M-17.7:4), the ego screams in our ears, demanding we protect ourselves from His incursions on our special peace. And protect us the ego does, guiding us to identify with the body, the symbol of mindlessness that keeps us from returning to the mind, wherein lies our only true defense—choosing love instead of fear.

The ego, needless to say, never lets us in on its craftily maintained secret that the defense that is the world protects nothing but its wrong-minded thought system of separation and guilt. These delusional thoughts preserve our individual selves by staving off annihilation from the Holy Spirit's Presence in our right minds. The truth remains, however, that the ego self is made up—a non-existent problem—as is the external defense that ends up hurting us—a maladaptive solution. Therefore, following the ego offers no true safety or protection, and so we all continue to wander "in the world uncertain, lonely, and in constant fear" (T-31.VIII.7:1). This article contrasts the ego's insane line of defense with our true safety: the Love of God, held for us in safekeeping by Jesus.

The World and Body: A Maladaptive Solution to a Non-Existent Problem

The problem with defenses, simply stated, is that they ultimately do not work. Indeed, they serve merely to make the matter of the ego worse. Recall this important line from the text: defenses do what they defend (T-17.IV.7:1). The purpose of all defenses is to protect us from something we fear—internal or external. This means that the source of a defense is the fear that has its home in the mind, regardless of its outer expression. Therefore, since the meaning of anything lies in its purpose, and the purpose of defenses is to protect us from fear, it inevitably follows that all defenses will remind us of our fear, for without it there would be no defense. As Jesus explains, believing we are separated we must identify with the ego's defenses, in this case the body:

Thus the body, the ego's major defense in its war against God's memory in the mind, becomes the great reminder that the ego thought system of separation is alive and well, and very dangerous. Moreover, once in the world, we cannot help identifying with the body—the ego has obliterated all memory of the mind's Self—that we now believe is our safety from the mind, the ego's home of guilt, fear, and punishment. Yet the body, literally the projected thought of separation, sin, and death, but decays, crumbles, and dies (W-pII.5:1:2). Not a very effective line of defense, to be sure, for the body clearly provides no safety in a world that was made as an attack on God and symbolizes fear (W-pII.3. 2:1-2), as we read from the workbook:

The world provides no safety. It is rooted in attack, and all its "gifts" of seeming safety are illusory deceptions. It attacks, and then attacks again. No peace of mind is possible where danger threatens thus.…The mind…knows not where to turn to find escape.…It is as if a circle held it fast, wherein another circle bound it and another one in that, until escape no longer can be hoped for nor obtained. Attack, defense; defense, attack, become the circles of the hours and the days that bind the mind in heavy bands of steel with iron overlaid, returning but to start again. There seems to be no break nor ending in the ever-tightening grip of the imprisonment upon the mind (W-pI.153.1:2-5; 2:6; 3).

Since the danger is within the mind and ideas leave not their source (see, e.g., T-19.I.7:6-7; T-26.VII.12-13), the world and body can offer no defense against the menacing attack inherent in the ego's thought system, at the same time, once again, that they reinforce the sense of imminent and mortal danger. Thus the ego has successfully protected itself by first establishing a non-existent problem—the separation thought system of sin, guilt, and fear—and then making up a maladaptive solution—the world, body, and the special relationship. And all the while the true problem—the mind's decision for the ego—remains hidden, virtually inaccessible to the correction of Atonement.

Thus does the world seek solutions to its problems—one after another after another—all designed by the unconscious ego not to work, for the ultimate cause of distress and suffering is the mind's decision to believe in illusory guilt, which remains buried beneath the ego's maladaptive solutions:

No one could solve all the problems the world appears to hold. They seem to be on so many levels, in such varying forms and with such varied content, that they confront you with an impossible situation. Dismay and depression are inevitable as you regard them.…All this complexity is but a desperate attempt not to recognize the problem, and therefore not to let it be resolved (W-pI.79.5:1-3; 6:1).

As an example, consider for the moment our situation as bodies living in the early 21st century. There is no part of our physical experience that has not been adversely affected by the environment. The air we breathe, the water we drink, the food we eat—animal or vegetable—all have been contaminated by our post-Industrial Revolution world. When you add into the equation the effects of global warming, not to mention the radioactive fallout of governmental experiments and use of atomic warfare and artillery coated with depleted uranium, there is indeed no hope of adequately defending the highly vulnerable body. No matter how valiantly we strive to keep up our bodies' immune system, we shall lose in the end, for there is no truly effective way to combat the persistent attacks on our physical and psychological selves.

One form of humanity's attempts to solve the world's problems falls under the category of utopian visions, which embrace the full spectrum of our ingenuity and inspiration as a species. Despite their good intentions—recall Jesus' cautionary words: "Trust not your good intentions. They are not enough" (T-18.IV.2:1-2)—almost all these idealistic programs have ultimately failed, for they did not succeed in addressing the problem of the mind's guilt. One prominent vision was offered by Karl Marx in the late 19th century. Setting aside the political expressions Marxism has spawned in recent history, we see that this German philosopher sought to address the patent inequality among the world's populations, and offered a social, political, and economic system to correct it. To date, however, it has rarely been tried, and, even then, not been entirely successful. Sigmund Freud put his psychoanalytic finger on the reason. He addressed Marxism in two late works, and in effect stated that it must fail since, regardless of any merit to the program of Marx's vision, it did not identify the true problem—inherent aggressiveness—that resided in the minds of homo sapiens. Here is what Freud wisely wrote, and observe as well his penetrating analysis of what A Course in Miracles, decades later, would term special love and hate relationships. Succinctly stated, Freud saw Marxism (i.e., scientific socialism) as "a fresh idealistic misconception of human nature" that rested on "an untenable illusion" (XXI,113,143). This is his expanded thesis:

For men always put their newly acquired instruments of power at the service of their aggressiveness and use them against each other.…It is altogether incomprehensible how psychological forces can be overlooked when what is in question are the reactions of living human beings…[expressing] their original instinctual impulses… their self-preservative instinct, their aggressiveness, their need to be loved, their drive towards obtaining pleasure and avoiding unpleasure.…Aggressiveness ["this indestructible feature and untameable character of human nature"] forms the basis of every relation of affection and love among people.…It is clearly not easy for men to give up the satisfaction of this inclination to aggression. They do not feel comfortable without it.…It is always possible to bind together a considerable number of people in love, so long as there are other people left over to receive the manifestations of their aggressiveness (New Introductory Lectures on Psychoanalysis, 1933; XXII,177-79; Civilization and Its Discontents, 1930; XXI,113-14; italics mine).

The implications of Freud's words are that our behavior, however well meaning, will turn out badly if the underlying aggression—common to the species—is not dealt with. Freud's inherent pessimism—at least in the short term—is seen in his understanding our resistance to being without hatred: we simply "do not feel comfortable without it." This insight into our resistance is reflected in A Course in Miracles as well, where Jesus teaches us about our fear of love:

Under the ego's dark foundation is the memory of God, and it is of this that you are really afraid. For this memory would instantly restore you to your proper place, and it is this place that you have sought to leave. Your fear of attack is nothing compared to your fear of love.… Therefore, you have used the world to cover your love, and the deeper you go into the blackness of the ego's foundation, the closer you come to the Love that is hidden there. And it is this that frightens you (T- 13.III.2:1-3; 4:4-5).

This fear demands that we cling to guilt and hate as defenses, and thus our "hanging-on to guilt, its hugging-close and sheltering, its loving protection and alert defense…" (P-2. VI.1:3).

Therefore, we can identify with love only by undoing the ego's hatred and greed—the content—before proceeding with the form of loving behavior. This undoing is the adaptive solution to the existent problem. In other words, our true protection against the projected evils of the world is to recall the projection to the mind, where we can effectively choose against it. By going within and choosing differently, we can be here without fear. Many years ago, my wife Gloria had a dream in which she was walking midst bombs falling all around her, but she was unafraid and unscathed. Each of us has the potential of walking the world of danger, yet feeling a peace that can withstand all attacks, which we would know to be illusory. That is what it means to accept the Atonement for ourselves, our one responsibility.

In summary, then, while there is relatively nothing we can do to truly strengthen the immune system of the body, we can, indeed we must, strive to build up the mind's immune system. It is in the mind alone that we find the true source of the problems of contamination and aggression—our decision for guilt—and there alone we find the true source of our protection—acceptance of the Atonement.

Watching with Angels – Part 2 of 2