I have a cute story about the title of this workshop, "Special Relationships: The Home of Guilt." For many years I would always refer to the Course as saying the special relationship is the home of guilt. Several years ago I got a call from a friend of ours who was going to give a workshop with that title, and she asked me where in the Course it was found. Well, I could not find it. Now this was before we had a concordance and an electronic search program. I went through every special relationship section and could not find it. I went through the versions that I had edited with Helen and I could not find it. I finally realized that it was not Jesus who said it; I was the one who said it. Regardless of who said it, it is a good phrase; and that is what we will be talking about today.

Let me start by reading a brief passage that is the inspiration for the kind of presentation I will be giving. It makes very clear how the special relationship is a defense. It is from Chapter 17 in the text, the section called "The Two Pictures":

(T-17.IV.3:1-2) You have made very real relationships even in this world. Yet you do not recognize them because you have raised their substitutes to such predominance that, when truth calls to you, as it does constantly, you answer with a substitute.

(T-17.IV.3:3–4:3) Every special relationship you have made has, as its fundamental purpose, the aim of occupying your mind so completely that you will not hear the call of truth.

In a sense, the special relationship was the ego's answer to the creation of the Holy Spirit, Who was God's Answer to the separation. For although the ego did not understand what had been created, it was aware of threat. The whole defense system the ego evolved to protect the separation from the Holy Spirit was in response to the gift with which God blessed it, and by His blessing enabled it to be healed.

The chart depicts how the special relationship is the ego's answer to the Holy Spirit, as these passages explain. That encapsulates very succinctly the whole defense process, but what I would like to do is flesh it out. We as a decision maker (represented on the chart by the black dot at the top center of the split mind) chose the ego instead of the Holy Spirit. We made that choice because we liked the idea of being on our own, being free with an individual identity that is separate and distinct from the Identity as God's one Son. We chose the ego instead of the Holy Spirit's Atonement principle because that Atonement principle would mean that the separation never happened, which would mean that this individual self that we cherish and worship is an illusion.

Once we made that choice, the ego became aware of threat. And as this passage briefly explains, the ego does not understand the Holy Spirit, love, or anything else that in any way, shape, or form has to do with God or truth. It does understand threat, however, the threat to its own existence. Yet, the threat to its existence is not the Holy Spirit. The threat is the Son of God choosing the ego, realizing he made a mistake, correcting that mistake, and choosing the Holy Spirit. Again, it is not the Holy Spirit that is a threat to the ego; it is our choosing the Holy Spirit. That is the key to unlocking all the secrets of A Course in Miracles. It is all about reminding us that we have a choice. The ego's fear is of the power of our mind to choose, because it is that power to which the ego owes its own existence; and it is that power (our belief in the ego) that could snuff it out.

The defensive system the ego now needs and is about to develop is geared toward ensuring that we never change our minds. It is the mind, or more specifically, the decision-making part of our mind that is the enemy. Therefore, the first step in its defense is described in the workbook as a double shield of oblivion (W-pI.136.3-5). The first shield is guilt—part of the sin, guilt, and fear triad in the center of the box on the chart—because guilt says that the separation has happened, that it is a fact. But it is so terrible a fact, and so overwhelming an experience of self-hatred because of the sin against God and the destruction of His Love and Heaven that the ego says we deserve to be punished for this. That punishment will come in our mind because that is where we are, and it will be inflicted by no less an agent than God Himself, Who will somehow rise from the grave in which we put Him and come after us and destroy us. That is the origin of all of our fear.

It is because of this fear born out of our guilt that the second shield of defense occurs. On this tier the ego tells us that the only way we can be safe is to leave our mind, which psychologically is known as projection. We project the thought system that is within the mind, the separated self that is now a guilty and separated self. We project that from the mind and make up a world and a body in which we can hide.

The thought of the Atonement still remains in our mind, but it is now buried by this veil of guilt. Guilt says the separation has happened, which means the Atonement principle—the separation did not happen—cannot be true. That is the first step in the ego's two-step defensive process. The next step, once again, is that the ego drives us from our mind. Literally and figuratively we become insane. The guilt is no longer experienced in our mind; it is now experienced in the world or in our body. Of course what we then do, because this is inherent in the second level of defense, is say the guilt is not in me; it is in someone else. It is at that moment that the special relationship is born. The first part of this class will be about how guilt accomplishes that.

Now, the guilt is no longer in me; it is in this other person. That is why the world of specifics was made. If I am going to get rid of my guilt, there has to be someone to whom I could give it, someone onto whom I could project it. Thus, I must make up a world in which there are a multitude of separate bodies, seemingly outside me onto whom I can put this guilt. That is the nature and the purpose of the special relationship. When we speak of the special relationship as "the home of guilt," it is because that is where guilt finds its final resting place. That is where it is secure. When we feel at home, whether it is an actual place that we call our home, a relationship, a concept, wherever it is, we are expressing the idea that we are comfortable there, that we feel secure. Well, guilt is very secure and comfortable in the special relationship; it is very well taken care of there.

The special relationship, actually, is the ego's home away from home, because the true home of guilt is in our minds. Moreover, one of the nasty things about projection is that ultimately it does not work, because the purpose of all projection is to take the guilt that we have made real in our mind, as a defense against the Love of God, and then put it outside us in the magical hope that by giving it away putting it in others and attacking them for it, we will be free of it. That is the whole purpose: that I believe I can get rid of guilt and be at peace by finding the bad guy outside me.

The sad fact is that projection does not work, because the guilt that I think I am getting rid of simply stays put in my mind. It does not go anywhere. And being in my mind, it continually regenerates, and continually forces me to project. What makes it even stronger is that the more I project my guilt onto you, the guiltier I become, because on some level I am aware that I am attacking you on false pretenses. On some level I am aware that you are not the one who is responsible for my lack of peace, for my not being happy. And so the more that I project my guilt onto you, which is what attack is, the guiltier I feel; and then this sets into motion the whole guilt-attack cycle. This is what makes this world go around; it is certainly not love. The more guilty I feel, the more I need to get rid of the guilt through attack. The more that I attack, the more guilty I feel, and we just go around and around and around. The special relationship thus is the home away from home. The true home of guilt is in our mind, but then we seek to displace it onto a body, a relationship. That, then, becomes our home away from home.

The picture I have just given you of this two-tier defense can be summarized in a statement that is also not in the Course. I made this one up, too, but it is clear where it comes from: that guilt is blind and it is also blinding. It is blind because it does not know about the Holy Spirit or love. It is also blinding because guilt sees to it that we will not know about love. That is the first part of the blinding aspect of guilt. The second part is what makes it such a powerful and insidious defense and such a successful one: guilt blinds us to itself. Guilt not only blinds us to the Atonement principle in our mind, but it also blinds us to its presence in our mind. What guilt does is drive us outside our mind into the arms of the special relationship, and once we are in the arms of specialness, we do not have a clue, a memory, or anything that would even faintly hint to us that the guilt is really our own. It is not our own, so we think, because of this personal self in this body, psyche, or personality. Guilt is blind, once again, because it has no awareness of love or the Holy Spirit. It is also blinding because it keeps that love as well as guilt itself from our awareness in our mind. 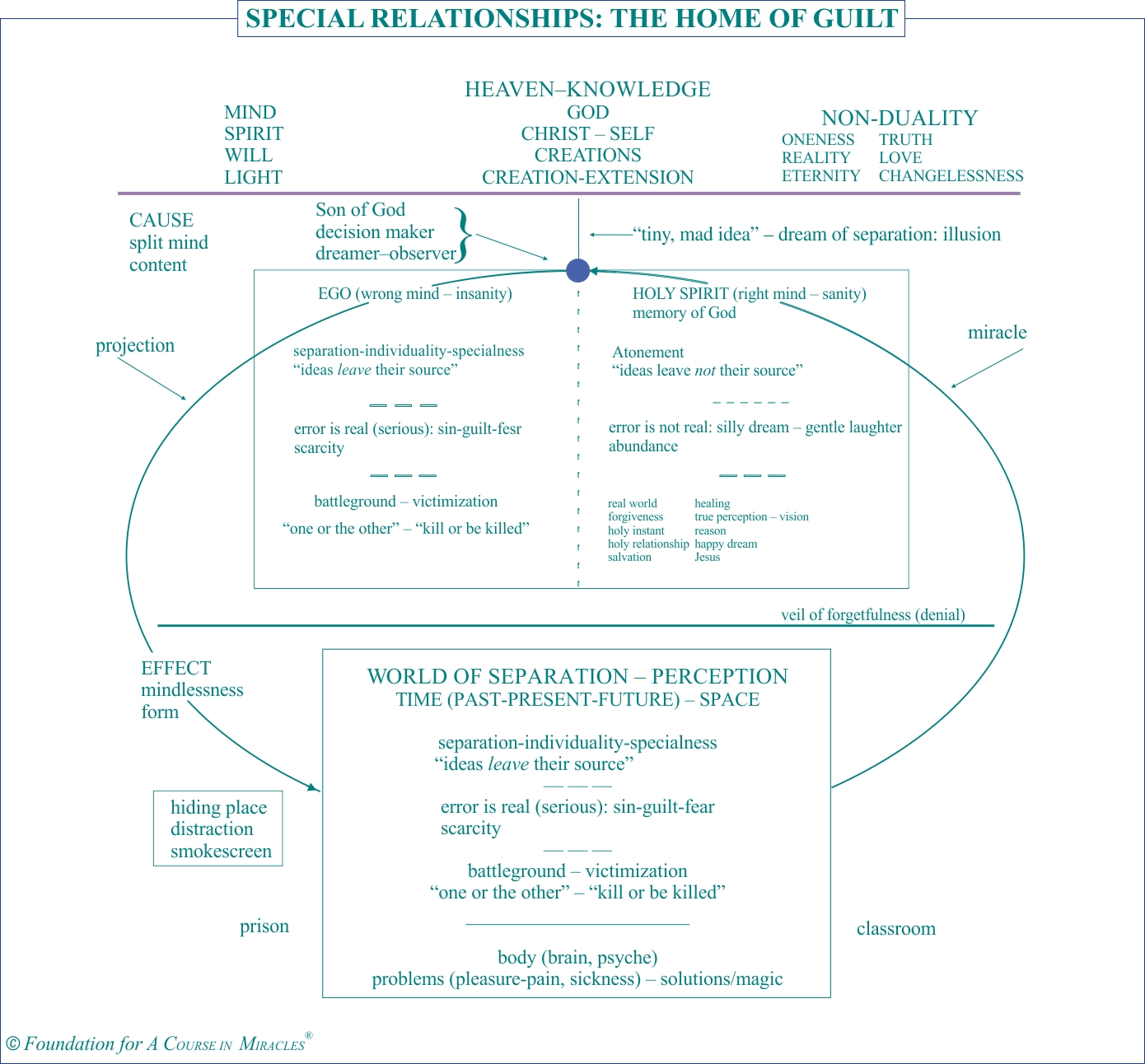