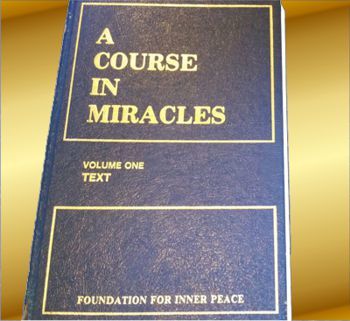 Benefits of Reading the
Text of A Course in Miracles

Benefits of Reading the
Text of A Course in Miracles

Benefits of
Reading the Text of
A Course in Miracles

Edited transcript of audio excerpt from
There Is a Light in You the World Can Not Perceive
Dr. Kenneth Wapnick

Edited transcript of
audio excerpt from
There Is a Light in You the
World Can Not Perceive
Dr. Kenneth Wapnick

In an old tape set of mine I was asked the question “how does one get from an intellectual understanding of the  Course to an experience?”, and I said one of the ways would be to read the text, even if you don’t understand it.

I think the point I was making was encouraging people to read the book. Because I think it’s a good thing to read the book. And what I meant by “even if you don’t understand it, you should read it”— because the Course is written and the text, especially, is written in such a way that no matter where you are on the ladder, no matter where your intellectual understanding is, you’ll probably most likely find something which will be helpful to you. If nothing else, no matter what your IQ is, you can’t miss the point that the Course is not big on judgment. That’s pretty clear.

So if you get nothing else from this Course than that you’ll probably feel better if you don’t judge, that’s helpful. The Course is very clear that God loves us and God doesn’t punish us. So if you’ve grown up in a Judeo-Christian home where God was seen as a punitive agent or potentially punitive agent, that’s a helpful thought to have. So I think that’s kind of the point I was making. I did not mean that you should put the Course under your pillow at night and you’d get it through osmosis. I did not mean that. I meant actually reading it. And the other part of this, which I might not have kind of said then but certainly is an aspect of this, is that as you read through the text especially, as I’ve mentioned many other times, it’s written like a symphony, and where the same things recur over and over again. And so even if you don’t get something the first time, the chances are by the hundredth mention of it, it may come through.

And also, that it’s written in such a way that reading it itself is a process and is an important part of the process. That trying to make sense of it, in and of itself, is healing, because you’re trying to understand something that is going against—as I said before, going against everything you believe and what you think you are. And so that you enter into the process. Just like the workbook is a 365-day process, the text is the same thing. It’s like you…the learning is not on an intellectual level, which I guess maybe was the point I was making. Even though the Course is written on a high intellectual level, the learning doesn’t occur with your intellect. It doesn’t occur with your brain. Something happens if you spend day in and day out with this material. It kind of infuses you. And this is not by kind of a passive osmosis. It’s like you begin to think like this Course.

This is not just something that you could read occasionally and benefit from, even though that doesn’t hurt if you do that. But that it’s like you give yourself to it. And over a period of time, the Course has a way of getting to you, which is a metaphor of saying that you are opening your mind more and more to what is already in your mind that you have projected out and you think is in this book. So the process of working with this material, and especially reading the text, is really a reflection of your mind’s process of becoming more and more comfortable with its right mind as opposed to its wrong mind.