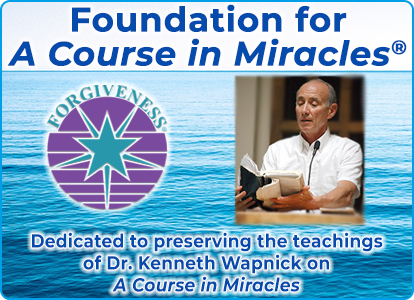 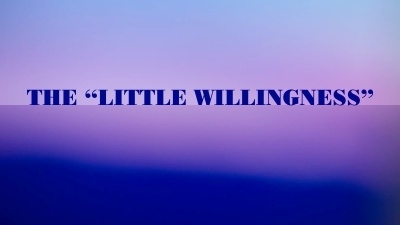 S: Oh of course not!

"To learn this course requires willingness to question every value that you hold. Not one can be kept hidden and obscure but it will jeopardize your learning. No belief is neutral. Every one (every belief) has the power to dictate each decision you make. For a decision is a conclusion based on everything that you believe. It is the outcome of belief, and follows it as surely as does suffering follow guilt and freedom sinlessness" (T-24.in.2:1-6).

In other words everything depends on where we put our faith. Do we put our faith in the ego's thought system or in the Holy Spirit's thought system? The "little willingness" which is how this paragraph begins "To learn this course requires willingness to question every value that you hold." does not mean that we’re asked to let go of what (values) we hold, let go of what we cherish. It means just to question it.

So the "little willingness" is that I become increasingly aware of when I’m choosing my ego. And instead of rationalizing and justifying it, denying it, projecting still further, spiritualizing it, I say, "This clearly is coming from my decision for the ego, which means it’s coming from my resistance to the truth that another part of me knows. This is coming from my fear of what it means to consistently choose Love. And that this is what I'm doing."

The "little willingness" is that I no longer try to justify what I do. I call it as it is. I look at the problem as it is not the way I've set it up. So I'm aware that if I am consistently upset, I'm consistently angry, anxious, depressed, despairing, consistently in pain in whatever form, this is coming from my mind's decision.

Alright. And so just as I read at the end, "... a decision is a conclusion based on everything that you believe. It is the outcome of belief, and follows it as surely as does suffering follow guilt and freedom sinlessness." Suffering follows guilt, so if I'm suffering in any way physically or psychologically and I experience myself as being unfairly treated—this doesn't mean every time you have a pain that you're choosing guilt, but it if you make the pain front and center, if you make the pain the defining element in your life, then it's because you’ve chosen guilt. So love is not the defining element in your life. Guilt is. Pain is. Suffering is. Being unfairly treated is.

And so guilt comes from a decision. So the "little willingness" is seeing how this dynamic operates repeatedly in your life. And if you could do it without judging yourself and simply say, "Obviously I’m enamored of suffering, I’m enamored of having a problem, I'm enamored of this self, I'm enamored of this identity. And that's what is propelling me forward. That is what is determining everything I feel during the day." That’s the "little willingness." And it's the looking at that without judging it that is what undoes the ego.

The key thing…I quoted you the line that "Forgiveness is still and quietly does nothing. It merely looks and waits and judges not." It's the not judging that is the key to undoing the ego. I see what I’m doing. And it's the "little willingness" not to attribute cause to something external to me. That what we always do…that what we are always projecting is the cause. So the cause of everything about me including my physical existence no longer lies in my mind's decision for the ego. It lies in something external to me. So the "little willingness" is recognizing that. So a very simple way of understanding what a "little willingness" is, is saying two things - Lesson 5 and Lesson 34: "I'm never upset for the reason I think." "I could see peace instead of this." That's it!

Excerpted from Words and Thoughts