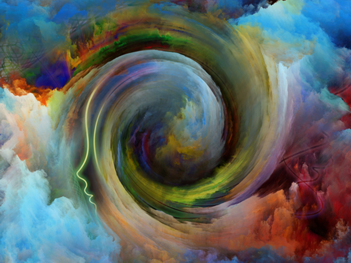 Nothing in the world

can make me happy

Edited transcript of
audio excerpt from

Ideas Leave Not Their Source

Kenneth: Good question. Everybody hear Prudi’s good question? The question is that if the guilt is unconscious—and I said you’ve got to deal with the unconscious guilt—how do you do it, since it’s unconscious? We’ll get into this later on, but basically, the way you deal with the unconscious guilt is you choose a teacher who will instruct you that what you’re perceiving outside in your world, in your relationships, in your life, is a projection of this unconscious guilt. So since you can’t look within right away to the unconscious guilt—by definition, it’s unconscious, which means you’re terrified of it—but you can look at its effects. And since cause and effect are the same—that’s why that concept is so important: Ideas leave not their source. Jesus says by asking me to help you look at what you’re doing in your relationships, I will help you realize what is going on within your mind. Because he says in the text, the world we see is an outward picture of an inward condition.

Well, number one, I don’t know that there’s a condition inside because I don’t know there’s an inside, let alone what it is, which is guilt. But if the world is an outer picture of what is within, and I now have a teacher who gives me his eyes through which I can look, I now begin to understand that what I’m acting out with you—and what I’ve acted out with everybody else in my life—is nothing more than, again, this outward picture of an inward condition. That’s the way of getting back inside.

Well, since we’re on the topic, I’ll quote Freud. One of his famous lines from The Interpretation of Dreams is that dreams are the royal road to understanding the activities of the unconscious mind. Jesus would say the exact same thing. In fact, this whole Course is an explication of what that statement means.

Dreams are the royal road to understanding the activities of the unconscious mind. What Freud recognized very early on in his work, that there was something going on in his patients. And he began as a neurologist. There’s something going on with his patients. And he began to see that it wasn’t what the textbook said it was. But he had no way of getting to it. Well, he stumbled on the idea of analyzing dreams. And he suddenly realized what goes on in dreams is what goes on in people’s minds. And since everybody dreams and what they dream about is all this horrible stuff—that’s why everybody’s neurotic. And the way to get to the unconscious is through understanding the dreams.

What Jesus does in the Course is do the exact same thing, but shift the definition a little bit. Because for him, the dream is everything in this world. So understanding our dreams, which is our everyday life—that’s the royal road that takes us to understanding what’s going on within our minds. And so that’s why relationships are so important. Because more than any other area of our life, that’s where we project all this sleeping guilt, all this unconscious hatred—what the Course refers to—"our secret sins and hidden hates.” We don’t keep it within us because it’s intolerable, so we project it out. And we project it out onto other people. And by dint of doing that, we forget where it came from. Because the ego tells us, ideas do leave their source. The idea, namely, my hateful relationship with you, is really separated from its source, which is my hatred of myself, which is what guilt is.

Again, that’s what Freud’s gift to the world was. Without Freud, you would not have A Course in Miracles. He said to the world, there’s an unconscious. He was not the first one who talked about it, but he was the first one who worked with it. And he said there’s an unconscious and you’d better pay attention to it. And Jesus is saying the very same thing.

There is unconscious guilt in you that’s born of your secret wish (thought) that you killed God and continually wish to kill God. That’s what’s responsible for everything that’s going wrong in your life. And so again, let me help you analyze or understand what’s going on in your relationships and that’s what will show you what goes on in your mind. My relationship with you doesn’t change. My relationship with you is irrelevant, because it is all made up. What’s important is that the relationship becomes the way, the royal road, that leads me back within, to my mind.